Our Staff
Dr. Dawn Sackman, D.V.M. & Owner
Dr. Sackman is a 1986 graduate of the University of Missouri College of Veterinary Medicine. Dr. Sackman moved to the Chicago area shortly after graduating and began her career at Lincoln-Way Animal Hospital. She also spent several years practicing emergency medicine at Emergency Veterinary Care South before she opened and co-owned Laraway Animal Hospital in 1994. In March of 2000, shortly before the birth of her daughter Paige, Dr. Sackman opened Sackman Animal Hospital. Dr. Sackman has a labrador retriever, a labrador/border collie, an english setter, and six cats. In her free time she enjoys going to the zoo, going on college visits with her daughter, and spending time with her friends and family. 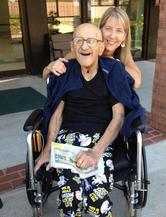 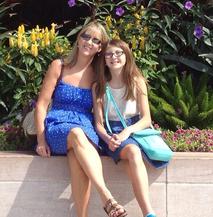 Paige, Veterinary Assistant
Paige is a freshman at the University of Alabama, ROLL TIDE! She is currently in the honors college studying secondary education with an emphasis on biology and a minor in Spanish. Paige was an active flute player in the high school band, a quartet known as Flute Salad, and a member of the Metropolitan Youth Symphony Orchestra.  Thorughout high school Paige spent her free time studying, going on college visits, riding horses, participating in Best Buddies and Grand Griffins, hanging out with friends, training her dogs, and gaming.  She is the former president of the Venture Crew, an off-shoot of the Boyscouts of America.  Paige was also an active in ROTC and has risen through the ranks during all four years of high school.  In 2018 her JROTC Academic team took 3rd place in the Air Force Division (out of over 300 teams) at Nationals in Washington, DC. In 2019 Paige was awarded the state seal of bilitteracy in Spanish. In June of 2019, Paige graduated Suma Cum Laude from Lincoln-Way East High School. 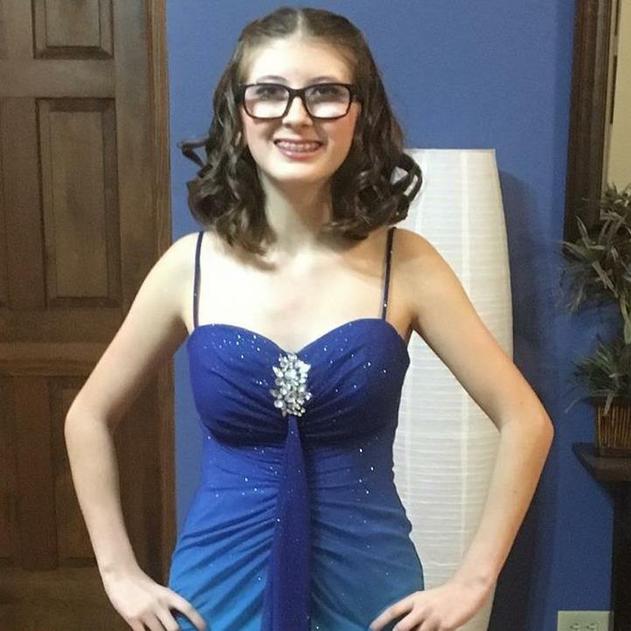 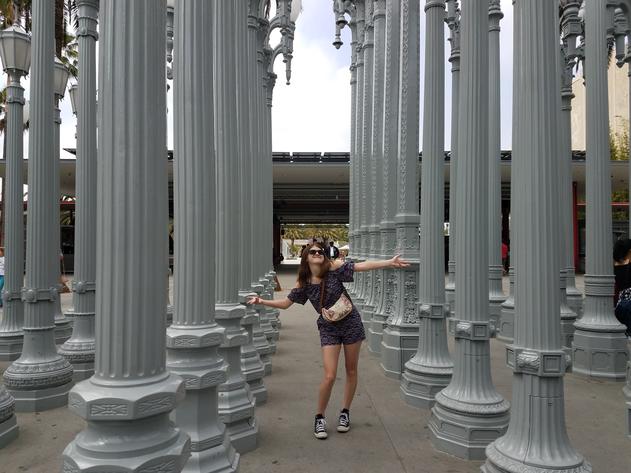 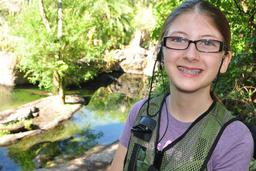 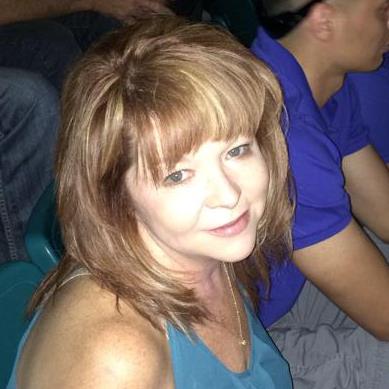 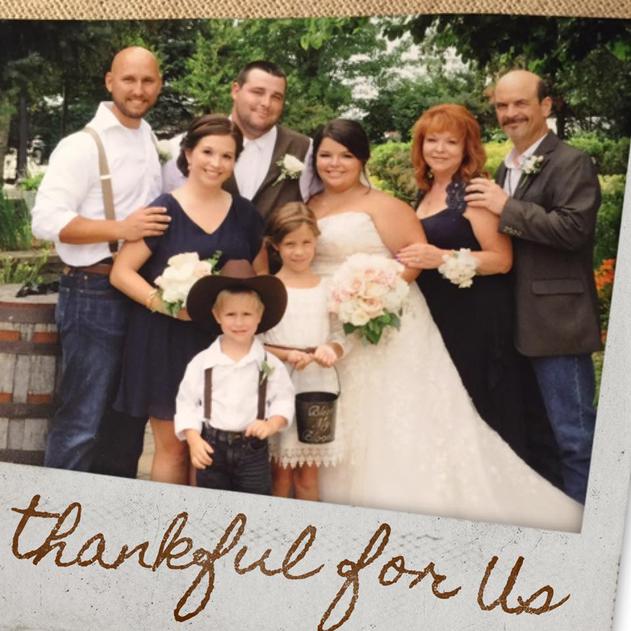 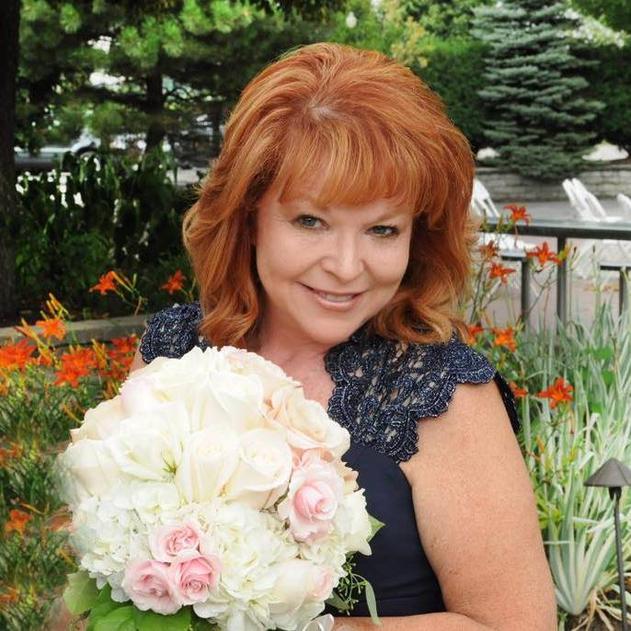 Sherry Hancock, Veterinary Assistant
Sherry joined our staff in March of 2005 and quickly became a part of our family. Sherry has a background in medical billing and excels in customer service. She has a special interest in small dogs and goes out of her way to make sure that all patients feel comfortable during their office visit or stay with us. Outside of work Sherry enjoys traveling with her husband, spending time with her two daughters and their husbands, and her beautiful grandchildren Gracie, Brandon, and Jackson. Sherry has a dachshund named Bailey, two new terrier additions named Petey and Petunia, a cat named Butterball, and an extreme gumball addiction.
Andrea Fischer, Veterinary Assistant
Andrea joined our staff in November of 2012. Andrea graduated from the Vet Tech Institute at Fox College in May of 2014. She is passionate about music and enjoys running, biking, hiking, walking her labrador retrievers, and traveling.  Andrea and her husband, Anthony, share their home with their dogs Juno and Loki, a cat (Luna), a Cockatoo (Chloe), and a tortoise (Blink). Andrea is a vegan and her FAVORITE time of year is Halloween.  Andrea currently works with us on Saturdays and fills in as she can , since going to a full time corporate job in November 2016.  Andrea dreams of one day owning alpacas! 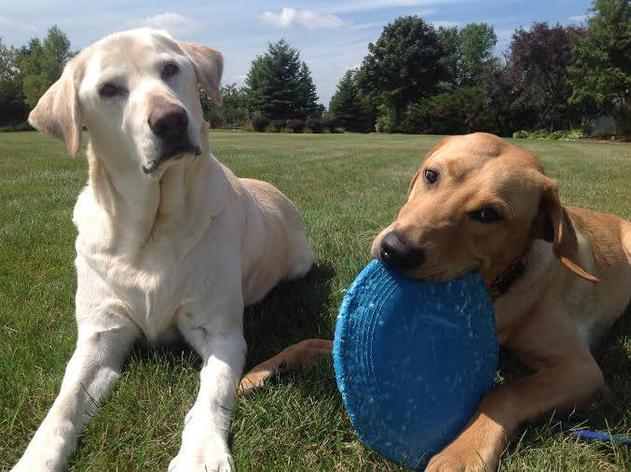 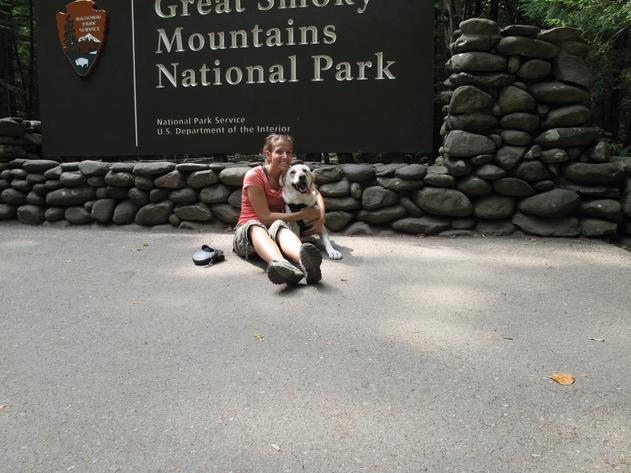 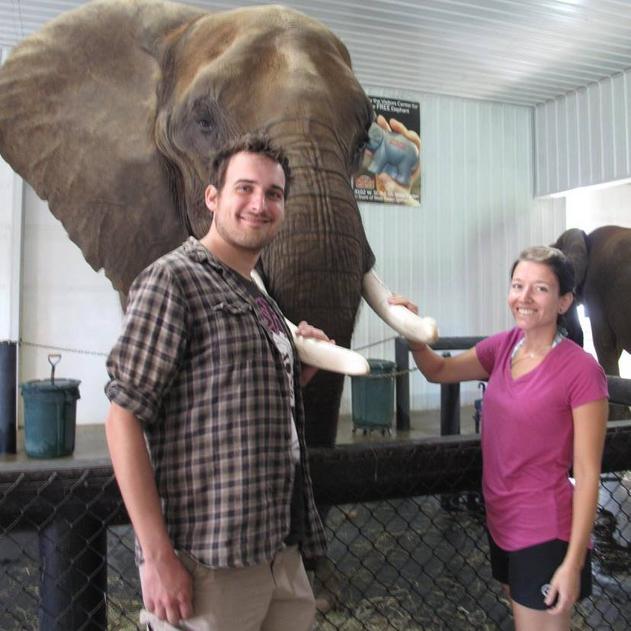 Donna Hudson, C.V.T
Donna is a 2012 graduate of the Vet Tech Institute at Fox College and joined our staff in January of 2013. Donna's previous experience includes customer service, one year of working at an area emergency hospital, and a veterinary technician externship at Beecher Veterinary Clinic. Donna passed her VTNE (Veterinary Technician National Examination) in April of 2013 and officially became a Certified Veterinary Technician. Outside of work, Donna is the proud mother of 2 children, one starting her college career this yeart at Southern Illinois University and the other starting his high school career. Donna shares her home with her dogs. Donna also enjoys spending time at her kids sporting events and activities. 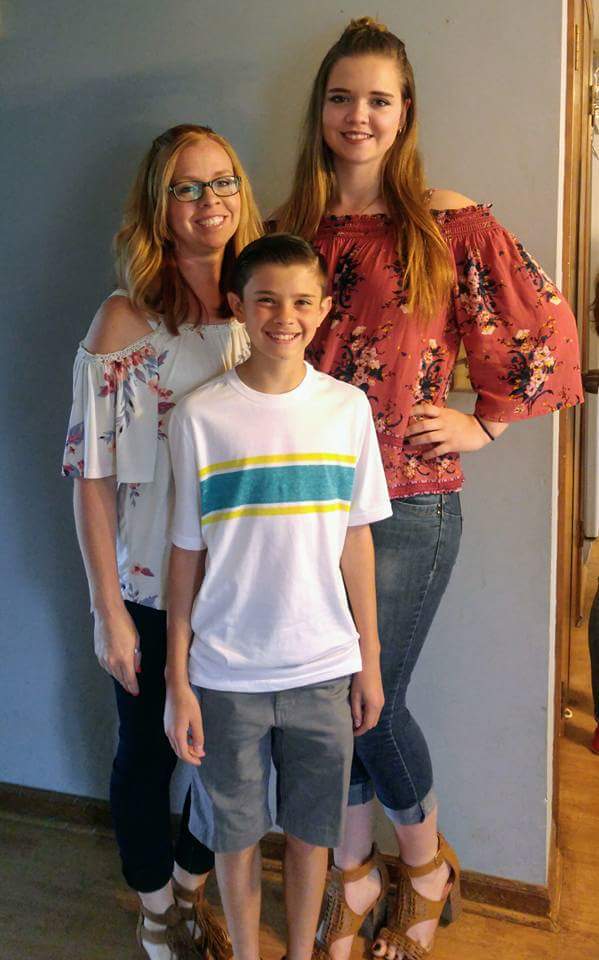 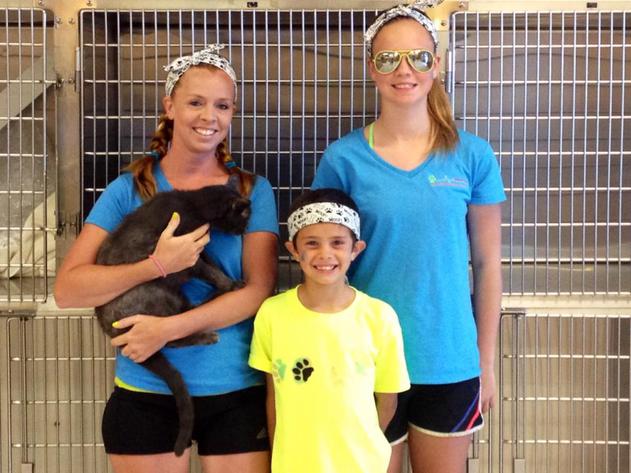 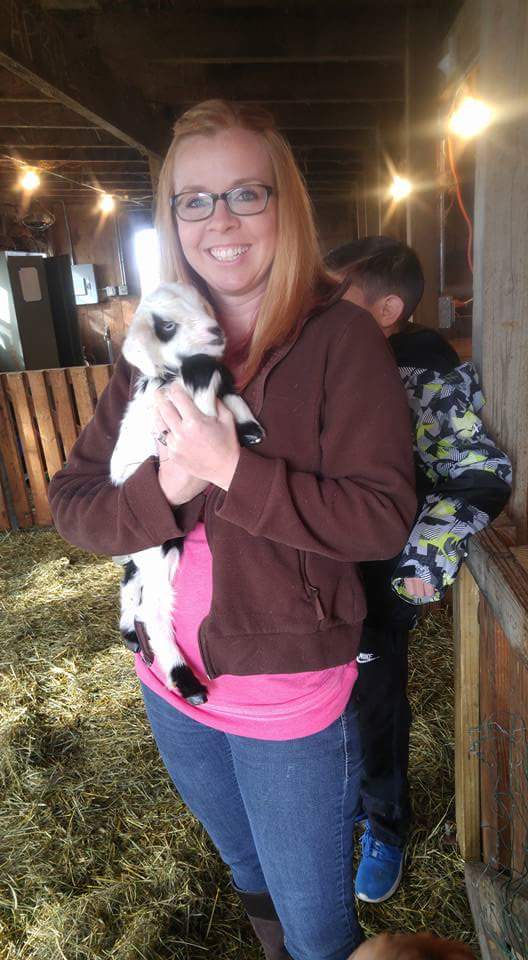 Navy, Resident House Cat
Navy joined our family in December of 2013 after coming in for a neuter and finding his way into our hearts. Navy has a big personality and a knack for creating trouble. He enjoys standing on his hind legs, contorting into odd sleeping positions, and stealing our food. His best friends are Cheech and Chong, our resident chinchillas. 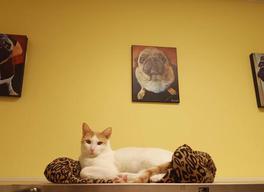 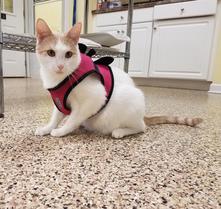 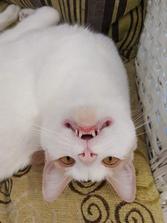 Piper, Resident House Cat
Piper joined our family in July of 2014. Piper was found on the roadside with her deceased mother by a tech at another animal clinic and was adopted by Sackman Animal Hospital to keep Navy company.  Piper spends the vast majority of her time sleeping.  When she is not sleeping she is typically begging for food and making herself at home in the filing cabinet. 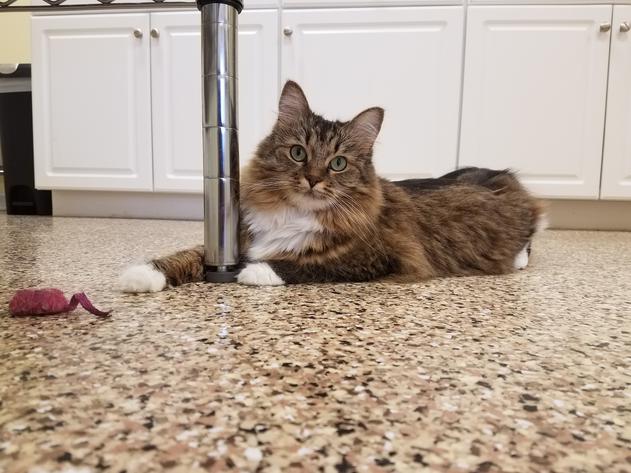 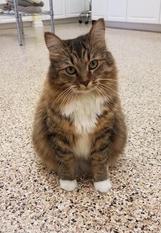 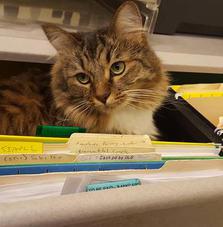 Cheech (white) and Chong (grey), Resident Chinchillas
Cheech and Chong joined the Sackman Animal Hospital family in June of 2015.  They keep us all entertained as the bounce around their cage and munch on their treats.  They love interacting with our staff and house cats. 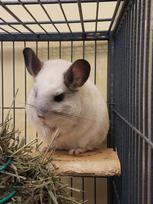 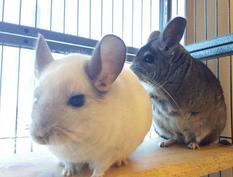 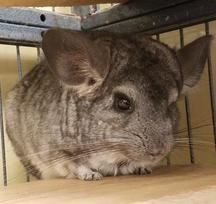 Freak (July 10, 2004-March 24, 2014)
Freak was our resident house cat from the time she was 6 1/2 weeks old until we lost her unexpectedly to a cardiac issue. Freak was a faithful companion, sympathetic grief counselor, and always willing to show our clients "how to". Freak was a polydactyl (meaning she had more toes than your average cat) and left her unique paw prints on all of our hearts. 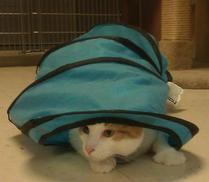 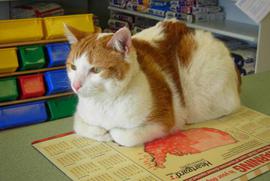 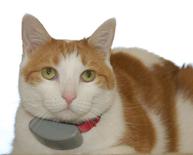 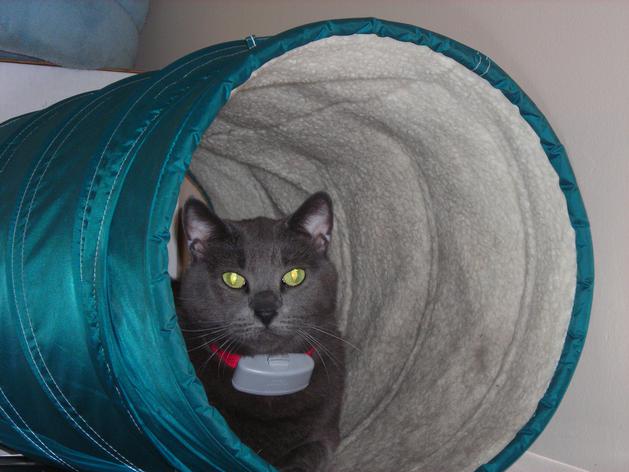 Zeus (August 1, 1997-May 5, 2016)
Forever in our hearts. Zeus was our first house cat and a true survivor. He taught us the value of true friendship and love (you definitely had to earn his). He was a sympathetic grief counselor and the old man who never failed to keep us all in line. Zeus overcame severe dental disease, diabetes, allergies, and a bout of liver failure before finally succumbing to kidney disease and old age. 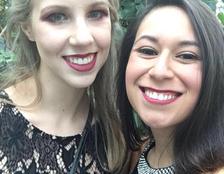 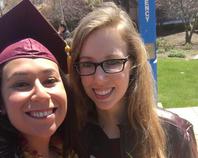 Tara Blomberg, Veterinary Assistant
Tara joined our staff in November of 2016.  Tara has a BS in science and currently is employed full time as a Food Safety Coordinator for Barry Callebaut, a chocolate manufacturer.  Tara and her fiance, Mia, are currently planning their wedding.  Tara works with us every other Saturday because she loves working with the clients, patients, and our awesome staff. 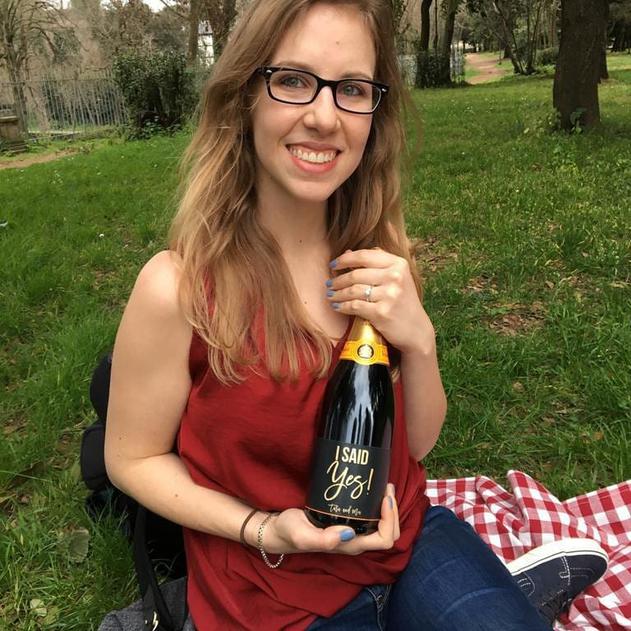